i hope you OD 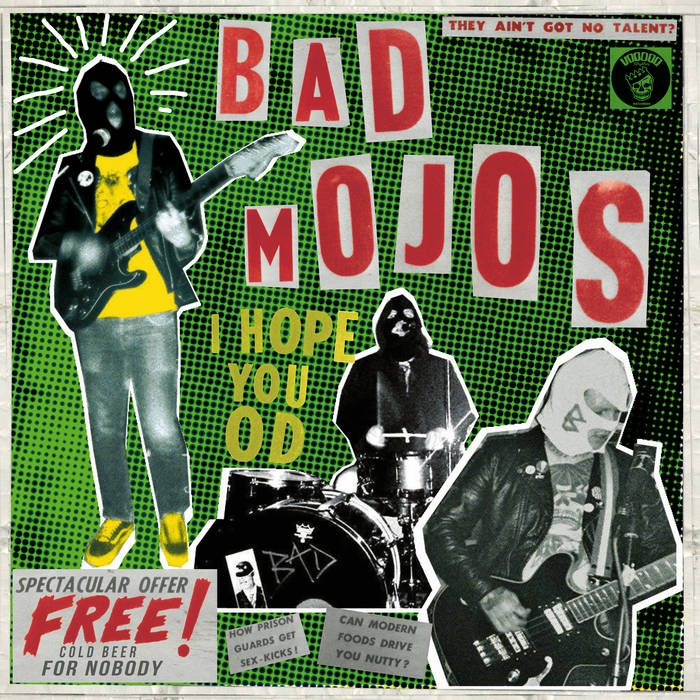 BAD MOJOS from the beautiful Rural Mountain Town THUN in the canton of Berne,SWITZERLAND where the cows Shit freely and Stink Happily in their beautiful landscape, 3 youngsters formed a PUNK ROCK Band via SMS with the intention of producing 185% Fist in your Face punk rock, Away from Sincerity or Arty Farty conservative Music and this what you are holding in your hands: punk with a lot of TRASH & ROCK'N'ROLL and No-Border Attitude, they say their influences are GG ALLIN (the most hated man in the Rock'n'Roll circus) and Mahatma Ghandi (most loved one on this planet) For the recordings we sent them to the south of France to give them into the hands of Lo Spider (SWAMP LAND STUDIOS) to recorded one of the most trashy rawest swiss punk albums of the modern time, unfortunately it is far away from radio capability and it hurts while listen very much.
Switzerland's not a place for UNDERGROUND music you may think but we'll show you differently, Switzerland had the most powerful banks in the world, inventors of the RED CROSS but export weapons to war zones, the richest people in the world live here .. so you can say that Switzerland is the only country in the world where it is legitimate to form a punk rock band to make up for it, from Bern and surrounding areas come the probably craziest and most underrated bands in Switzerland (the Jackets, Grauzone, THE MONSTERS, Lightning Beat -Man, GLUEAMS, Eigernordwand etc) We are very proud to present to you the new generation their first full length album after some 7 's on No Front Teeth Records (UK) and Kink Records (DE)

Strophe 2
I’m awaiting my own death
Not long till my final breath
My road to hell is paved
Good intentions always failed
Track Name: baby i'm doomed
Baby I’m doomed
Strophe 1
Being alive is a waste of time
Looking in my mirror causes me pain
I can’t fix my head, I can’t fix my life
There’s no escape from my state of mind
Refrain
Baby I’m doomed
Strophe 2
Anxiety’s got a hold on me
I can’t see through my misery
Doesn’t matter what I try
Doesn’t matter what I do
Depression rules my life
It will rule yours too
Baby I’m doomed
Track Name: i wanna be dead
I wanna be dead
Strophe
Sick of doing shit I don’t wanna do
Disappointed since ‘92
Born naked on the path to hell
Now I wanna be dead, dead, dead go!
Refrain
Drop dead!
Track Name: i hate
I hate
Strophe 1
Scummy little prick
Pretending that you care
Acting like an emperor
I’ll hit you off your chair

Refrain
I hope you OD

Bandcamp Daily  your guide to the world of Bandcamp

Featuring Gary Bartz, 5 years of Rhythm Section Intl and an LP of the week by Nicolas Jaar